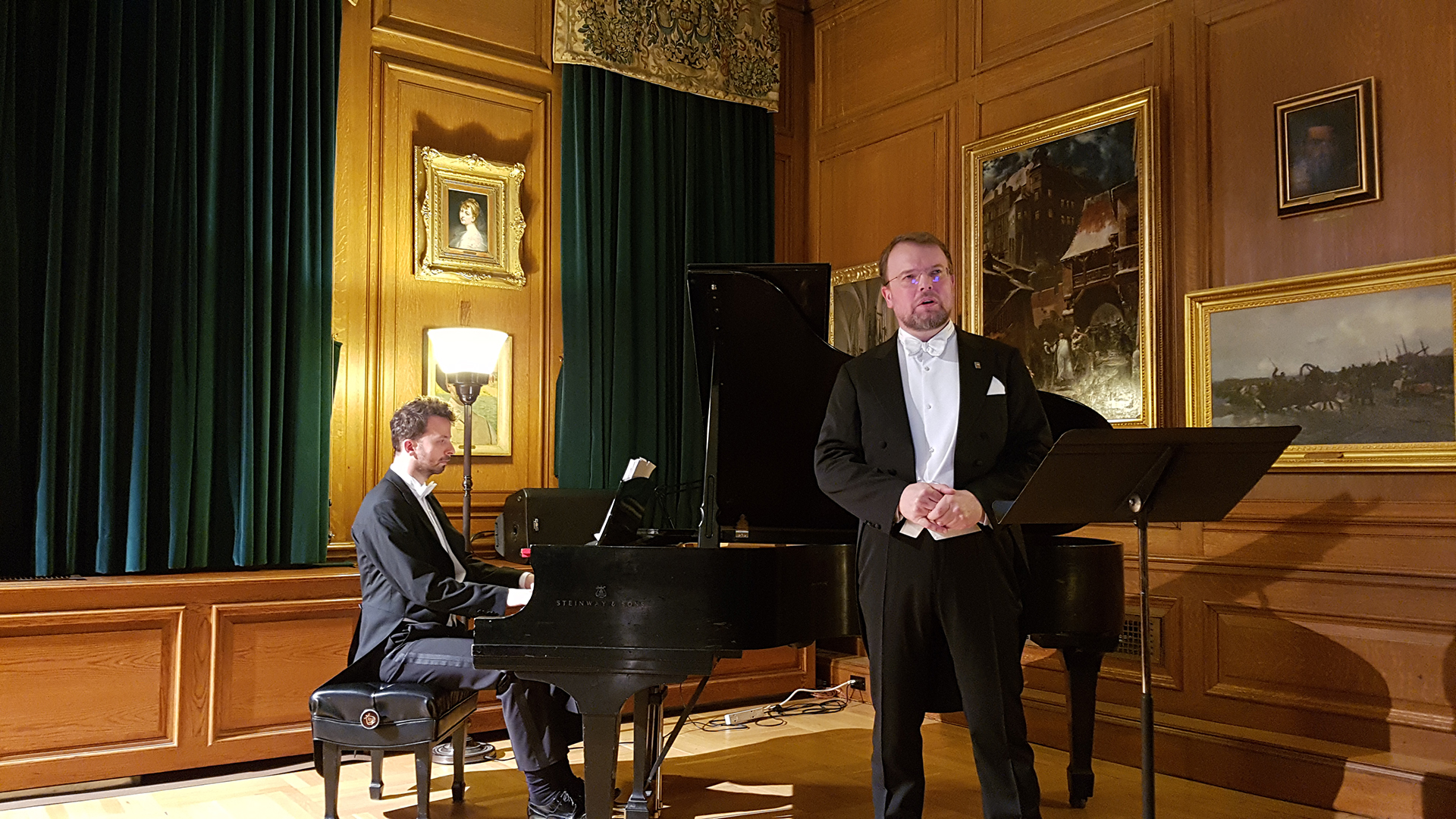 The building that houses the Kosciuszko Foundation in New York City, now 101 years old, was the beautiful stage for an interesting new adaptation of Schubert’s famous Winterreise (Winter’s Journey). Music for the evening was provided by two considerable talents, in bass-baritone Tomasz Konieczny and pianist Lech Napierała.

This recital featured an interesting twist on an established classical favorite; melding the haunting Schubertian harmony and melody of the inimitable song cycle, with the poetry of Polish writer Stanislaw Baranczak. A Harvard lecturer, and esteemed translator of many great works of fiction from English into Polish, Baranczak became enamoured with Winterreise, and he determined to emboss it with poems that represent his own artistic experiences/ideas. This wasn’t simply some half-hearted attempt to jigsaw someone’s favorite poems into music they thought was appropriate. It was a deliberate endeavor, by a motivated artist, to imbue new meaning into the great works of the past. More of a posthumous collaboration than a ‘remix’.

But did it work?

As a preface, I should say that I spent a great deal of my graduate and post-graduate studies writing on, and singing, Winterreise (specifically the musical idioms Schubert used to represent text). It merits pointing out that Müller, the original lyric poet who wrote the text for Winterreise, published his work in 1822 and 1824, and Schubert set that text to music three years later. This is important to remember, because it means that the music was created with the words in mind, and not the other way around. The text initially informed the music, and, for the original iteration of the song cycle, they told a story in parallel.

In the original Winterreise, there are certain musical idioms that harken back and allude to ideas, words, emotions, and events that the wanderer has throughout the work. Though the songs, in a sense, can be seen as events or snapshots of the journeyman’s fateful voyage, they are thematically connected. The traveller walks, he leaves a note on the gate, he sees the wind playing with the weathervane, he sees a tree under which he used to sit, he sees a crow flying along with him, etc. All of these things are happening to him in real-time. As a result, no part of the textual story is exempted from Schubert’s influence. Rhythm, harmony, melody, silence, tempo, and macro-harmonic structure are all anchored to the wanderer’s experience of the journey. They transfigure the text, and serve as the setting of the story.

Though Baranczak’s poetry is often quite thoughtful and artful, his poems are disparate from the musical scheme over which they have been laid. As a result, the songs become more like individual vignettes, or one-off thoughts that occur to the poet as he is going through life. A journey of a certain sort, to be sure, but not one as coherent as that of the physical and emotional experience of Müller’s wanderer.

Müller was no Goethe or Rilke, and his poetic strengths lied with the ease of his meter and imagery. Though Baranczak mirrors much of Müller’s formal constraints, along with a certain German gloom, his poetry is often high-minded and political at times. There’s something avant-garde about it; treatises about the worse nature of humanity dialing in to hear about catastrophes, alongside the sports and weather news. It’s not the same kind of lyric poetry, and, to be fair, I don’t think it was supposed to be. But there was more than a little bit of cognitive dissonance on my part; hearing a continuous story in the music, and seeing an array of smaller stories in the room.

But it’s not important to talk about what this work is supposed to be, let’s simply take it for what it is.

This work is a fine artistic effort to breathe new life into a cherished medium. Polish is a lovely language in which to have this music set, and it shares much of the depth of character that German affords sung poetry. Baranczak’s poems, while not uniformly well-woven into the vocal line, were generally unobtrusive, and often quite complimentary. That just means the right kind of vowels went where they were supposed to go. I was prepared to be skeptical, or bored, but was quite entertained. There were deviations, too, in tempo and musical interpretation; many that enlivened the senses, and a few that didn’t hit the right mark for me.

The evening’s vocal offering by Mr. Konieczny (who can currently be heard at a number of productions at the Met) was as ambitious and thoughtful as the piece itself. His is a noble tone; befitting of his usual Wagnerian repertoire. The singing was vivid and full of color, only occasionally veering off of the breath in one or two of the higher, softer passages. The majority of the cycle was marked by his pleasing and even singing, even down through the very lowest notes. He sang over a stand of music, but was only lightly tethered to it, and he afforded a rich, interpretive, sometimes declamatory understanding of the text; in every phrase and line. He acted the words so effectively that I came out of the room thinking that I understood Polish. Alas, I do not.

Mr. Napierała played the music exquisitely. Each touch felt as though it was choreographed instead of it being played. His interpretation had an extemporaneous feel to it; as though it were something totally new.

Together, the two of them seemed almost telepathically connected. Each song was marked by crisp rests, dynamic changes, fluctuations and continuities in tempo; catching the audience off guard again and again. Between them, there was a laser precision to each musical consideration in each song. It was really exciting to hear.

From an artistic perspective, this setting is worthy for the examination of more audiences to come.

This review was a collaboration with Voce di Meche.